DISCLAIMER: This game was developed for the Ludum Dare 38 jam

You suddenly wake up to realize you're the president of Panamá. It makes no sense, you hate responsibilities and have no idea where this country is located.

Your duty as a president is to take care of this beautiful yet small country. To do so you must make decisions that will have an effect on every province's citizens.

Watch out for your citizen's needs, as it affects their happiness, which means less or more problems depending on how they're feeling.

If at the start of any turn you have at least 3 revolting provinces and 2 hit by depression, your charge will be revoked and the game will end.

Interesting game, but I'm not entirely sure what the point is. Apart from the info text, the only I thing I learned is that I should be dictator of Panama because I'd do an amazing job. It was trivial to satisfy the needs of all the provinces.

Before you read this, please be aware I am not complaining. I am very frustrated as I think is an intention of the game experience (or my version of it), but I appreciate that and am not complaining. I just.. hope I'm not putting all this effort into something that is upsettingly more random than I assumed <sweat_smile>

Also I used shorthand for some of the names. I don't know enough Spanish to know if that makes these particular words terrible or something. In every case I basically shortened it to the first word of the name unless that word means "the" in which case I obviously used the next word (ie Los "Santos").

Dude I am trying SO hard to spreadsheet this game and make correct decisions. I'm pretty sure I've never seed it go actually wrong,  but the logic of the history I've recorded from this game isn't making sense.  Maybe I just didn't record well enough from the start but for example,

on the game I just accidentally closed.. I'm pretty sure Veragues and Colon (sorry for not doing accents right now) had both been given the resource they want two turns ago, given attendance one turn ago, and yet still, on turn 8, both came out as losing motivation --even though they both said they became happy in the turn summary! Guna even had a left over resource of its own (Veragues did not).

Cocle seemed a definite candidate to lose motivation since they had never been given the resource they wanted nor attended to (though I guess lack of attendance can't hurt when they also never lost motivation in the first place) and I had worked them 4 turns before hand, yet Cocle wound up "spreading happiness" (which I'm not sure if that's just a status or actually something that affects the other provinces)!

Darien at least made since at the start of turn 8. It also had never been given the resource it wanted, like Cocle, Darien also never had an issue to attend, and thankfully Darien did as I expected and lost motivation . I didn't want them to suffer but it made sense, unlike Cocle, Guna, and Veragues. Anf for crying out loud, Guna and Veragues were just constantly either ignoring my effort for them or going back into lost motivation a little later. Everyone else became happy after I gave them either the resource they wanted or attended to their minor issues (both actions being done after they lost motivation). And then a handful of them were like Cocle.. just.. so stoic for no apparent reason. What was going on?!

Either way I just want a separate paragraph to say that I am playing this with a spreadsheet open where each province gets now about 24 columns  of data for every turn.. and many of those cells have multi-word values or in a few cases a string of numbers.

But.. that game vanished because I was foolish enough to click the patch notes on the same page I had the game open. 7 Turns of history and an 8th turn just started vanished like that.  and... I'm gonna try again. I want to know dang it. What is the design and structure of this game? When do things get REALLY bad? Why are some provinces so stubbornly troubled or stubbornly fine? Am I missing important variables in what affects them? NNGH! I wanna know!

Please tell me I'm not doing all this for a fool's errand. Please?

Edit: Also, The desires of the provinces changed seemingly very randomly at some point in that game and I didn't notice until turn 7. Like at the start 5 provinces wanted pottery and then suddenly 3 of those 5 want coffee and I don't remember the rest but 3 others wanted coffee and just.. wow.

I think you can only react to dissatisfaction, not prevent it. It seems to be random. The "spreading" of happiness is within the province and I don't think it affects any other provinces. When trying to get rid of excess resources, I felt that the resources they want can only change if you give them what they want.

Nice game hope u do another games like that but on other countries :D 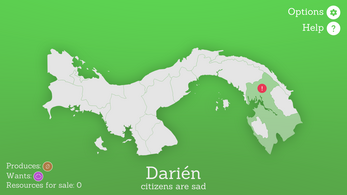 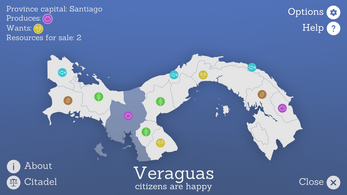 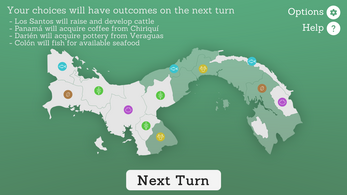